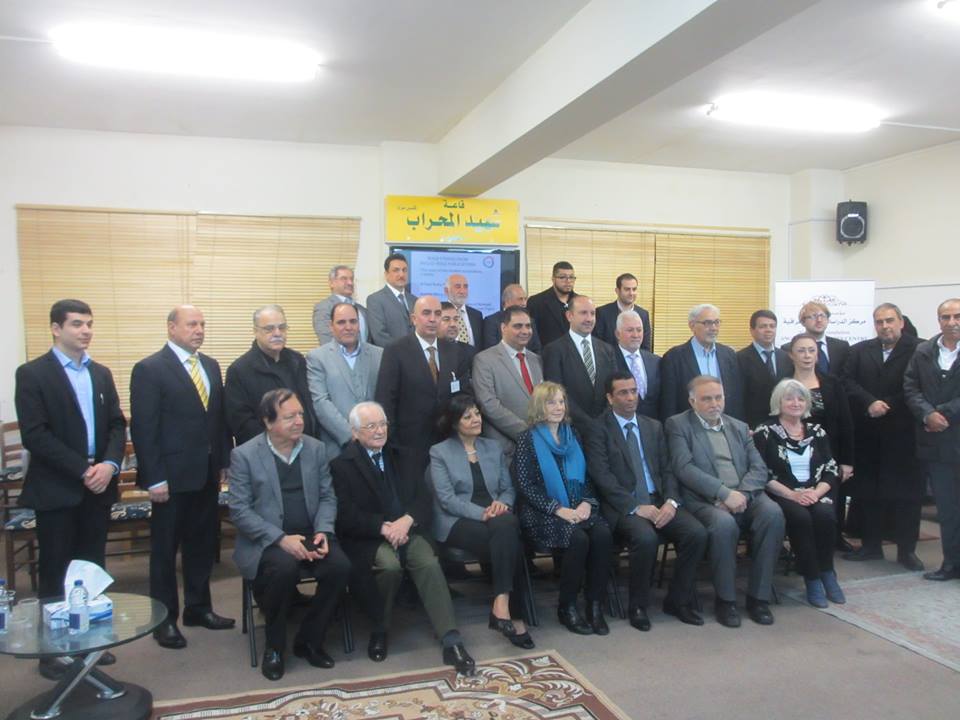 On Saturday 23 January 2016, the Anglo-Iraqi Studies Centre (AISC) was launched in London with the presence of Dr Akram Al-Hakim, former Iraqi Minister of Agriculture and the Iraqi Ambassador to the UK, Dr Saleh Al-Timimi. Both gave speeches which emphasised the importance of Anglo-Iraqi studies. Also at the launch were a diverse range of academics drawn from the Iraqi and British communities.
The launch included speeches by Ms Jenny Lewis, literature tutor at Oxford University, who spoke about her Anglo-Iraqi connections and her Mesopotamian projects, and also Mr Ihsan Muhsin, Director of the Anglo-Iraqi Dialogue Foundation and Mr Nadeem Al-Abdalla, AISC Project Manager. This was followed by an evening of networking and a tour of the centre and its library.

You can watch the launch of AISC online at:  https://www.youtube.com/watch?v=fqCPFPO5k5A The AISC launch featured speeches from Mr Ihsan Muhsin, Director of the Anglo-Iraqi Dialogue Foundation which the AISC project has been established with, to welcome guests to the launch and to the centre. This was followed by a speech by Mr Nadeem Al-Abdalla, Project Manager and editor of this monthly newsletter, introducing guests to AISC, its philosophy and aims, and its services and activities. Next came a speech from Ms Jenny Lewis of Oxford University, who talked about her work in the field of Anglo-Iraqi studies and her various projects on Mesopotamia (Iraq).

Dr Akram Al-Hakim, former Iraqi minister of agriculture, spoke to guests about the importance of Anglo-Iraqi studies in strengthening ties between British and Iraqi communities and in promoting greater understanding of Iraqi culture and the historical ties between both countries. Turning to his experience in the field of agriculture, he has recommended a book kept in the centre’s library, “The Lepidoptera of Iraq” (by Edward Parr Wiltshire, published 1957) as a key source of information during his university career and his time at the Ministry of Agriculture.

The final speech was given by Dr Saleh Al-Timimi, Iraqi Ambassador to the UK, who also emphasised the importance of Anglo-Iraqi studies in strengthening ties between both communities. His speech can be seen in full below. “Greetings ladies and gentlemen,
We are delighted to be celebrating the opening of the Anglo-Iraqi Studies Centre, which we aspire to have a role in the ideology and cultural communication between Iraq and the UK. First of all, I would like to thank the director and members of Al-Hakim Foundation, the director and members of the Anglo-Iraqi Studies Centre. Their efforts have created this project, which is based at an important stage in the history of Iraq, and that provides an important and valuable source for those interested in the history of Iraq and the bilateral relations between Iraq and the United Kingdom. These two countries have shared a great history together that will improve their joint work in the future.
Today we live in a globalised world which has eased receiving information all around the world, however the cultural exchange between nations depends on their historical relations. Iraq and Britain had special relations for many years, and despite some clashes in the political relations at some periods of time, the relationship between the two nations was not affected and continued to grow, through the existence of big numbers of Iraqis in the UK, including the relationships between the academics, intellectuals and scientists from both sides.
Today we are proud of the Iraqi competencies in the UK, those who made a lot of scientific researches in Britain, we are delighted with the special efforts made by the researcher, Mr Nadeem Al-Abdalla, to count the researches of Iraq in the UK and gather it in one book, it was a great achievement for the different kinds of knowledge.
There are a lot of British principal achievements translated into Arabic, on the other hand a lot of Iraqi principal achievements were not translated to English. We strive for building centres that specialise in translating documents to both Arabic and English to help increase and encourage further understanding of each other’s ideology.
The studying centre is playing a big role in consolidating cultural and ideological relations between the nations, and it can improve the knowledge and science for those nations. I believe the Anglo-Iraqi Studies Centre will open the horizons for new knowledge and cultural exchange between the people of the two countries for their progress and prosperity I wish the centre all the success.
Thank you.” Iraqi Ambassador to the UK, Dr Saleh Al-Timimi with Nadeem Al-Abdalla, AISC Project Manager and the author of the book pictured, “Bibliography of English Books about Iraq”, containing a selected bibliography of over 2,500 books written in English about Iraq in the last two centuries. One of AISC’s projects is to expand and update this bibliography, publishing a further edition in time. OUR NEXT CULTURAL EVENT: “IRAQ & THE ARAB WORLD THROUGH THE EYES OF FOUR WESTERN FEMALE AUTHORS” – 8 DECEMBER 2017 (AISC OFFICE)

Our next cultural event will be held on 8 December 2017 at AISC’s offices. This…

Our next cultural event will take place in Ben Gurier, near Marrakesh, Morocco. Nadeem Al-Abdalla,…